It’s been a rainy day here today, which means it’s been a lazy day here today, garden-wise. I don’t place much faith in rain forecasts unless they predict at least a 90% PoP (possibility of precipitation)…which they did for today, so yesterday there was a mad scramble to get stuff done.

Last year I blogged about some caterpillars I raised, with pictures at each stage. Yesterday I noticed a couple Eastern Black Swallowtail (Papilio polyxenes) caterpillars out in the garden, which is one of the types I raise. Usually I get them on the carrots (Daucus carota), but this year I was so late starting the carrots that I expected to find them on the dill (Anethum graveolens). So obviously I had to be wrong about that and found them on the rue (Ruta graveolens) instead.

I’m really not sure why I planted rue…I make no use of it, but it’s right in the middle of the other herbs, and the yellow flowers do look nice when the lavender, chives, and sage are in bloom too – all purple flowers. I’m more permissive of volunteer seedlings than I really should be, so the first picture below shows one of the caterpillars on a small rue plant that popped up in the pebble skirt/border around the herb bed. The second picture is a caterpillar on the main plant. 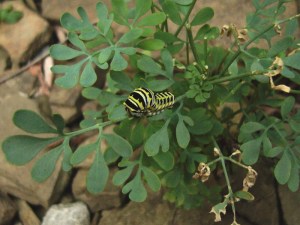 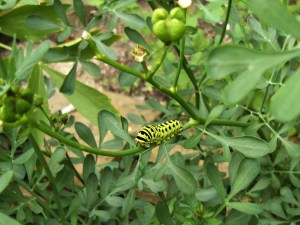 The one on the main plant is slightly larger, despite how they look in the pictures. The quadripartite blob at the top of the second picture is a rue seedpod/fruit forming. I don’t think I’ll bring these inside – they’ve obviously managed just fine on their own out in the garden. Now that I know they’re there, however, I might search for a few eggs to raise.

Yesterday I harvested some of the lavender (Lavandula angustifolia). I’d really hoped to be able to pick some elder flowers (Sambucus canadensis) too (for making elder flower wine), but just didn’t have the time, and more rain is forecasted for tomorrow. They were in perfect condition for picking yesterday too. Sigh.

What else…oh yes, the hellebore. I decided to try growing a black-bloomed hellebore this year (Helleborus x hybridus ‘Winter Dreams Black’). It didn’t arrive until May, so it had already flowered, as expected. Sometime after, it sent out some new growth and imagine the surprise when it flowered too. Right now there are two blooms on it; not quite as dark as they should be but I’m not complaining.

Some ‘Black Peony’ poppies whose seeds I simply scattered are starting to blossom. Unlike the ones I had last year, these really are about as dark as they should be, an extremely deep purple. Unlike the supposed ‘Schwartzwalder’ calla lilies, which continue to flower burgundy. Oh well.

And finally, a pair of American robins (Turdus migratorius) had built a nest in the lilac tree (Syringa vulgaris) earlier this year…right in the branch I’d fully intended to remove because it’s hanging too far over the steps. I saw three eggs before, and at least one of them has hatched. This is going to be interesting. Last year a pair nested in the Virginia creeper (Parthenocissus quinquefolia) and for three weeks after the eggs hatched, I kept getting divebombed.

It’s odd to see the butterfly milkweed (Asclepias tuberosa) and the swamp milkweed (A. incarnata) in full bloom at the same time. Usually the former blooms first and is just setting seed when the latter is opening, but I suppose like so many other things this year the butterfly milkweed is blooming late. It’s something of a colour palette disaster in my opinion, though: the combination of bright orange and dusty pink doesn’t do it for me.

The other early summer blooms recently opened are the elder flowers (Sambucus canadensis), the Ozark sundrops (Oenothera missouriensis), and the swamp vervain (Verbena hastata). Meanwhile the Canada anemone (Anemone canadensis), harebells (Campanula rotundifolia), American arnica (Arnica chamissonis), dahlias, and Ohio spiderwort (Tradecantia ohiensis) are still going well. Among the herbs the lavender (Lavandula sp.), rue (Ruta graveolens) and the lovage (Levisticum officinale) are in full bloom. And the thyme (Thymus vulgaris and T. citriodorus). I like thyme. I have it in pots all over the garden, not just the herb bed.

The wood poppies (Stylophorum diphyllum), eastern red columbine (Aquilegia canadensis) and pyrethrum daisies (Pyrethrum cinerariifolium) are also still going, but I think those are about to fade.

Speaking of elder flowers…elderflower wine soon! A pity it wouldn’t be ready in time for the Master Gardener potluck coming up, but I guess it just means more for me.

The roses are finally in full bloom too. I just put up a page for the roses, but it’s still a work in progress and I’ll add the missing types when I get half-decent pictures of them. I might make sub-pages about roses and rose care if I’m ever bored enough in future.

Unfortunately, I think I have to admit even to myself that the hazel (Corylus americana) I planted in May is truly dead. They’re usually tough little things, so I held out hope that it would resprout, but it just kept dying back and no new growth. Sigh. Next year.

I now have garden furniture! It was a windfall, really: my next-door neighbour’s mother passed away a few months ago and they recently got around to clearing out her storage locker (she’d been in a retirement home for the past dozen years). They’ve been scrambling around trying to find homes for all the furniture, so they offered me a bunch of plastic garden chairs and tables. I felt bad taking it all, but they assured me I was doing them a favour and wouldn’t take any money.

It does feel kind of odd in a way, because I never had any garden furniture except a potting/worktable and a small bench that’d been in the garage for donkey’s years and I have no idea where it came from. There was never really any incentive to get garden furniture because I’m generally the only person in my garden and if I feel the need to sit down, the ground or the steps are good enough for me (the aforementioned bench usually being covered with pots). Sadly, the first thing I did with them was stick the chairs in a corner, and put plants on the tables.