I haven’t done much in the garden for the past few days, but there isn’t really much to do now. There are a few things to clip down and compost, but even those can wait until spring, and I won’t mound and burlap the roses until probably the middle of November.

I did make a start of harvesting the Jerusalem artichokes, a.k.a. fartichokes (Helianthus tuberosus). And by that I mean that I dug up the one that I planted out of place last year, though gods know why I did that. It also meant that with it gone, I could finally plant the poor suffering raspberry plant (Rubus sp.) a fellow Master Gardener gave me in May. This is a slight departure from my usual gardening M.O. because I very seldom put anything in my garden unless I know exactly what it is. She’s had that raspberry variety for a long time now and no longer remembers the name (so I can’t look it up), but I’ve seen it growing and tasted the fruit and I’m satisfied to have it. So I planted it in the space left by the fartichoke. That unfortunately was all I had time for today before it got dark, so I’ll have to deal with the remaining Jerusalem artichokes later in the week.

Another thing I’ll harvest soon is the remaining ‘Melissa’ Savoy cabbage. I started three plants this year, but one of the seedlings didn’t make it. Of the other two, one took longer to really get going than the other, so they naturally staggered their harvesting times, which was ideal. The first one got picked nearly a month ago.

This second one has been the subject of some attention when people visit the garden; for some reason they think it needed photographing. I’m not sure why; to me it looks pretty much how a cabbage ought to look and the first one looked the same…but I did take a picture. Apologies for the bird netting; I thought if I planted them at the edge of the strawberry patch, the netting would keep the accursed Cabbage White butterflies (Pieris rapae) off them. It didn’t. I used a lot of good words the first day I saw the butterflies just sailing right on through. 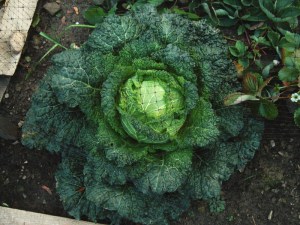 Anyway, soon cabbage will be on the table again. I like Savoy better than plain old white cabbage, and anyway I don’t see the point in growing the same things as in the supermarket, which are sadly increasingly becoming GM varieties.