Last year I followed the life cycles of two species of butterfly that frequent my garden, taking pictures at each stage: the Monarch (Danaus plexippus) and the Eastern Black Swallowtail (Papilio polyxenes). Every year I bring some eggs of each species in from the garden and raise them indoors. The Monarch diary was completed when they eclosed for the migration south, but the EBS story wasn’t quite finished.

Some EBS caterpillars will eclose in late summer/early autumn and overwinter as adults while others will overwinter as chrysalides and eclose in spring. Last year five EBS chrysalides did not eclose, so I placed them in a vase (still on their twigs) and put them in the garage. When the weather warmed up somewhat in early April I moved them to a sheltered patio outside, placed under an old glass lampshade to protect them from wind and marauding critters.

They’ve now begun to emerge; below is one that eclosed today. There was one that eclosed yesterday, but it flew off before I could take a picture. Another is set it eclose tomorrow, possibly even tonight, because the cuticle has begun to go transparent and the wing pattern showed through. 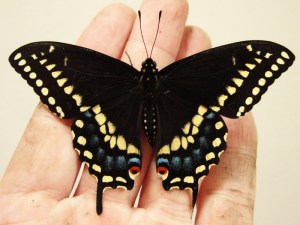 Pray forgive the dirty hand; I was working in the garden when I remembered to check on them. This one is a female, which is distinguished by the relatively large amount of blue on the hindwings. Although it buggered off as soon as I finished taking the picture, I have no doubts that this selfsame female will soon be back to lay eggs in my garden (probably on the dill because I’m late starting the carrots). Unless something eats it first.

This marks the full conclusion of last year’s butterfly diary for the Eastern Black Swallowtail.

And the Iris ‘Hello Darkness’ is finally blooming! I planted it last summer so I’ve never seen it flower; it budded over a week ago and I could hardly wait. It was well worth the wait and I’m SO happy with it. The Northern Blue Flag iris (Iris versicolor) is all set to bloom as well, and the Siberian Iris ‘Blue King’ has been in bloom for a week already.