Ugh. Just when I thought I could relax a bit for summer, there’s a huge infestation of sawfly larvae (Arge sp.) on the roses. It seems to get worse every year and I have no idea where they’re all coming from. This would be the second generation of the season…I crushed the ones from spring. Aphids too, but I expected those. Happily, the Japanese beetles (Popillia japonica) are quite low this year, possibly because of whatever happened last year to make them disappear.

Right now I suppose the garden’s just ticking over at its own pace. The castor beans ‘New Zealand Purple’ (Ricinus communis) and the feverfew (Tanacetum parthenium) have recently started flowering and a few other things are about to enter bloom. The four o’clocks (Mirabilis jalapa; I forget the cultivar name: Lemon something-or-other) have been flowering in their own unobtrusive way for a while now. Oh! and the ‘Helvola’ water lily has begun blooming as well. Gorgeous little thing. 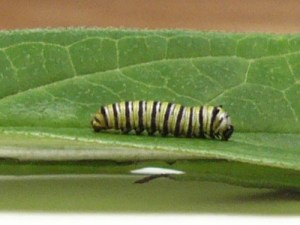 Day 9. Just behind the head (on the right) you can just see a stub that will eventually grow into an antenna-like projection. Monarch caterpillars have two pairs of these, one at either end. Presumably they act as sensory organs. 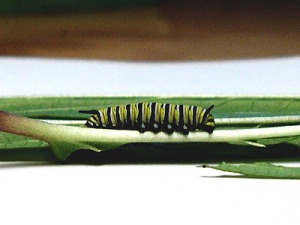 Day 11. At this point it’s just over 1 cm (about a half inch) long. This time the head is on the left, ducked behind the midrib of the half-eaten leaf (s/he’s being shy). The antennae are now clearly visible.  Just after I took this picture, it went into ecdysis. I think this is the third one, leading into the fourth instar, which would mean I missed ecdysis #2.

This one seems to be growing unusually quickly; either that or (more likely) the other one that is the same age is growing unusually slowly, because it’s only half the size. After they get to about this size, though, they grow incredibly quickly, mowing through their food at quite a rate…and producing lots and lots of frass. They rest occasionally, but really only slow down to moult, which takes anywhere from one to two days. A caterpillar’s job is to grow, after all.